Dangers of not having detailed communication with your builder 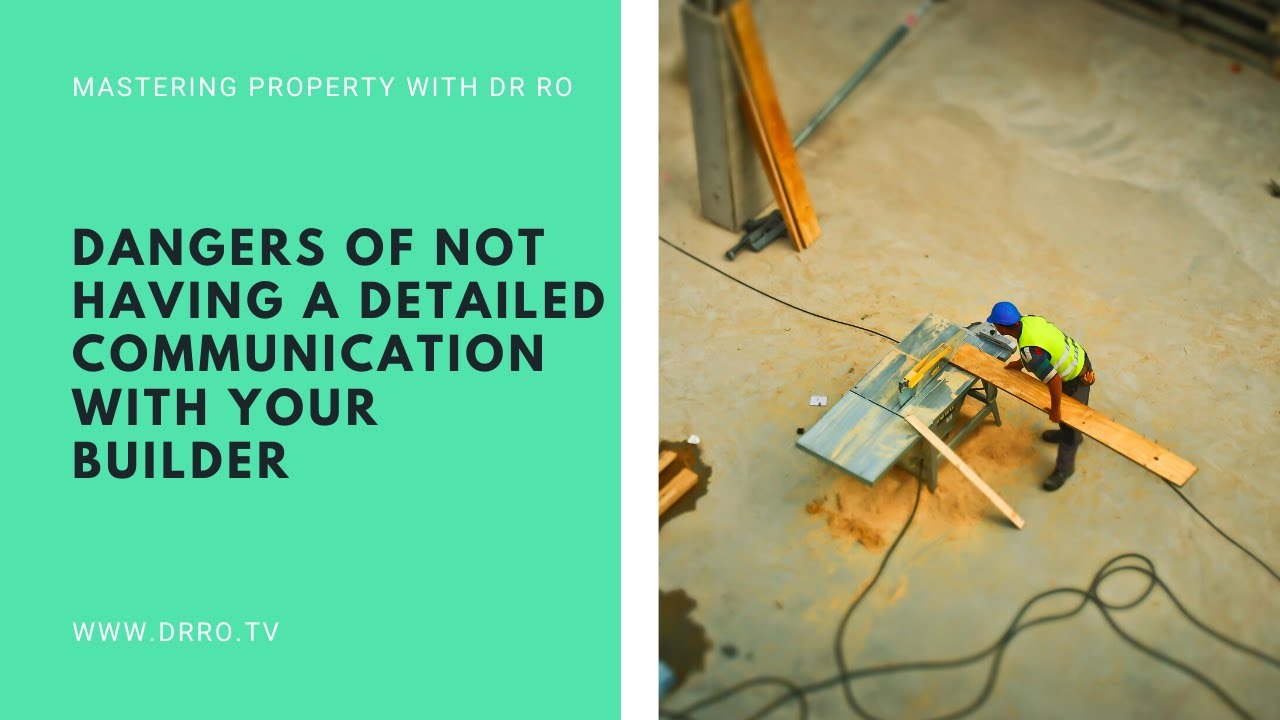 I’m on site and I wanted to share something with you whenever you’re doing any building work at all, any sort of renovation there are different levels.

You’ve got basic cosmetic renovation right through to everything to foundations coming off the ground, somewhere in between that would be a renovation where you’re going into a property and you’re gutting it out and it might be everything from the central heating system, damp, new windows going in. Going right back to the brick building or building off the existing brick coming out.

For example here is the garage, it’s been converted here so you can see the openings for windows going on.
This is a lesson that I want to share with everybody to be aware of and when I started out in property there were certain things I assumed were being communicated between me, the builder, the builder and his team, or the builder and the other specialists that come in.

On this particular project we’ve got everything from people dealing with damp right through to the window specialist, to the plumbers and all the various people in between.

Here is an example, there’s a funny story on this one actually. Here’s an example where we’ve got a whole new set of windows coming in here and this was originally the opening for the garage. I don’t know if you can see the two main openings for the garage now have been removed and we’ve got the stud work going on here. They’re creating one, two, three, four openings for windows and this will ultimately become like a gym garage.

So it’s been converted from a garage into a space for recreational use and in this particular case we are going for a Scandinavian style windows and there are certain things to be aware of.

One of things whenever the window fitters come out if your builders are not on site or somebody to communicate with them, they will need to know certain things, like for example is there rendering going in on the outside of this? If there’s rendering going on the positioning of the windows are really important. This is a detail you might think, is it irrelevant to me? It is actually because if they get it wrong the positioning of that window then will affect for example sills.

So the depth of the rendering is really important as that affects then when you do a final sill survey or actually it’s going to happen in terms of the length of that sill, so when the rain comes down, it can actually disappear off and move off the building. But equally, when I came here this morning he was asking me the question, the main builder was not around and then he arrived, but it was okay, what’s happening on the inside? Are you having plastering? What’s your plan?

Yes, we are great because he’s got to move the frame slightly in, he’s going to tie the frame to the inside of here. We are then going to have the final finish here which will cover all that. So that’s important.

Equally here get these dimensions correct. We had a situation in this project where quite frankly, there was a miscommunication from the original supplier of the window to the builder and then through that it got across to the main fitter and to give you an idea, across a window span like this on another part of the building, we ended up 30 mm too narrow.

Now there are ways to get around that but the problem is this particular style of window needs to have an 11-mil gap either side of the main window and the reason for that is because of the way the venting system works and how it’s sealed and how it’s located.

If you don’t communicate that, if that information is not communicated correctly to you or to your builder and you haven’t double checked that with, for example, window fitter they arrive on site and all of a sudden they go, “hold on a minute here we’ve got a door two windows either side, the last window we can’t fit because the dimensions are wrong.”

Then what happens is, in this case it was a wooden frame set up so they had to  change what’s called a goalpost, but if it was brick as in there might be that you have to pull the brick back and have to cut down through that particular area and actually open it up.

It may not sound like a lot, but it might set your project back a day, a day and a half, two days depending on how many occurrences of this there are. That then puts another cost on you and then where do you chase that cost back up to? You go back to the original fitter and say you should have communicated that to us, you go back to the original supplier and say that you gave these dimensions to our builder. He’s built to that but you forgot to tell us about this particular additional width that needs to be put in place.

These may not seem like big things but on a project that is large-scale if they start to add up, before you know it you’ve got five, 10 days of delays at whatever rate it is for the various people on site.

That could cost you thousands of pounds, we were quite fortunate here because there was a relatively quick fix and they were able to deal with it on Monday and the chaps have been back and are already fitting the new elements to the window.

My point is that anything like this that looks really obvious doesn’t assume anything. Always double communicate with the builder, make sure you’ve got the openings right, check back with the window fitters. Make sure you have allowed for the sill. In this case we are going to do a sill survey later on for every single window and there are a lot of them here. It will take probably because of the nature of these windows about a week to two weeks to have them built and brought it.

If you look down at the bottom here whenever you don’t have sills on the bottom of your double-glazed windows and the rain can traffic back through, this is where you’ve got your watercourses as well. This is a damp cause for what’s going to happen inside the garage later on. That’s where you see your water come back through as well.

A little bit of a funny story on this one, just to finish off what we’ve got in this particular situation is a ride on a lawnmower. Now that the lawnmower was originally here in the garage and when the cheapies came out and all this was ripped out about a week ago, they were very enthusiastic.

A lot of the stuff in the garage here was covered with wood, with old table tops with bits and bobs, nothing of any great value. Except there was obviously a lawnmower in here they did not spot that they put these up and of course the doors in, we had to get the lawnmower out of the garage and unfortunately they realised it’s this locked-in.

So that meant coming back in and basically removing this and taking the lawnmower out, so planning is really important. You’ve probably heard the phrase piss poor planning leads to a piss poor project. So just be mindful of these things. And of course now the lawnmower gets taken off site for security reasons.