What Team Do You Need for Your Renovation Project? Mastering Renovations Part 2 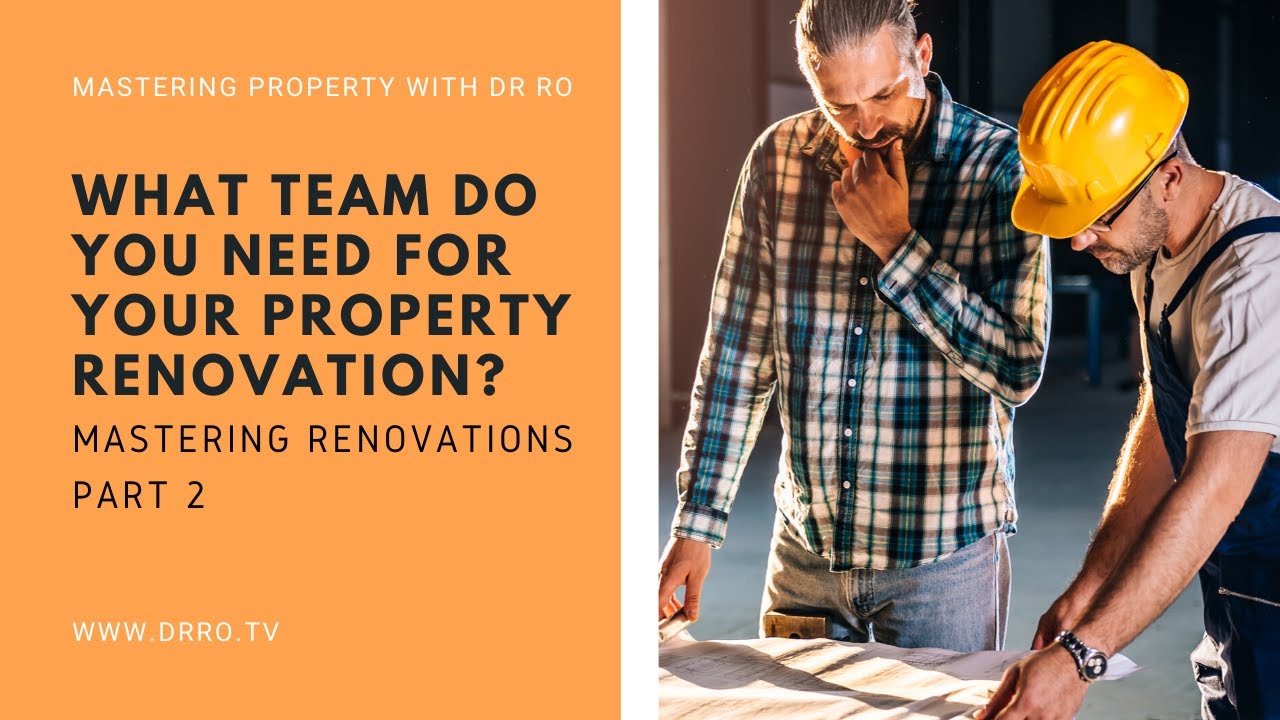 Hi it’s Dr Ro here with Colin Harperpenman again, on another element. If you haven’t watched the previous one we talked about planning and also planning process and planning permission.

What we want to talk about now is another element and I was just talking to Colin while we are here to find out what he felt was the right one to cover next.

We are going to talk about what the key people to have in and some of the key elements that need to happen really before any work starts correct?

We are going to talk about getting the right people in.

“Absolutely teams are so important. When you’re carrying out a refurbishment you do need a team that you can work with because these projects vary in timescale, and you’re going to be working with these people a lot.”

So think of it as two types of projects. You might be watching this and you’re just doing a basic refurb internal and a little bit of external. But while we are here we will talk about them like this one a bigger project.

“So this project here we’ve got a main contractor on site. I work closely with the main contractor as with Rohan and essentially planning everything out means that we not only need to manage and work with the contractor, we need building control to come in as well to assist us on that to sign everything off as we move forward.”

What do they approach Colin? If somebody is doing a basic refurb, taking out the kitchen doing the new bathroom, new carpets, that’s not necessary.

So we’ve got many steel beams going on here. The low one has been transferred into the ground.

“There’s a lot of building regulations we need to abide by with this particular project. So once we had achieved planning permission, we then moved on to our detailed design with building control details.”

Okay for someone watching this and they’re like we hear the term building control what does it mean. So what does it actually mean? What do they actually do?

“Essentially there is a set regulations that every property needs to abide by to achieve certain levels to make sure that it’s safe. So building control is split into a number of different areas which is from A-Z essentially, and you need to meet the minimum requirement per section. That sounds complicated, but this is where you work with people like the council approved inspectors to get signed off at certain levels because not everything applies to your project.”

Right and typical things include everything from the footage for example, the footing, the depth of the foundations have they dug deep enough.

“Exactly, and that takes us onto another layer of engineered design. So, not only have you got building control, you need to make sure you have an engineer’s design to get signed off from building control to allow you to do you extension and any structural work.”

So don’t get too distressed at this point, as in this house is distressed, but we’ve got structural elements, we’ve got beams, the load has to be transferred. We’ve got multiple levels of load coming in from different parts of the house, that’s your engineer designing that, but the building control will confirm that has been put in place properly by the engineer.

“And they do all the checks and then sign it off. You can then move onto the next stage.”

“So, if it doesn’t comply with building control, they can make you change it and change it to what does comply.”

And people do this?

“Of course, people run away with all sorts of work and you have to go on this retrospective approval. Which is difficult once it’s completed.”

On that note, you can really piss people off by trying to do something, and then retrospectively saying I didn’t know. Because actually if they dig their heels in, I mean I’ve known people put stuff up and had to take it back down again.

“It has to be rebuilt in the same way or it just gets taken down. And it can change your design. If you do it wrong and you do it incorrectly and it’s not signed off, you could end up having to go back to redesign that and it actually costs you more money.”

Ao the key here is talk to planning early, talk to building control early, talk to your structural engineers early if that’s part of the actual process you’re doing, the bigger project.

“And this is where an architect will come and help you because he manages them. He’ll be able to work with you and manage them, so that is an additional cost of the project, but it can take a lot of pressure away from you.”

For someone that’s not doing such a big project but they’re watching thinking, I’ve got a bit of damp, is that an element we need to incorporate in early at this stage?

“With damp, damp can come in various forms, so it’s rising damp yes, you need to get in early, because you need to put in your tanking system.”

Explain to them what rising damp is.

“There are various types of damp if you have a bathroom for instance with no extractor in there, that will go green essentially, because the moisture has not been taken out of the room because of showers and hot water, therefore creating damp on the walls.”

It looks worse than it actually is actually.

If you’ve got tenants in the house and you try and fudge over it, like black mould coming up the sides.

In fact, we thought we might have it here in the house, although I don’t know if it was that, it was more lack of insulation I think in one part.

“Ventilation is so important. That’s part of building control as well. Ventilation you need ventilation in the building. No matter what happens because the buildings need to breathe and that actually takes away the risk of any mould.”

So just recapping what we’ve said, if anything comes to mind. So first the previous video we talked about the planning process and the planning of the project. Now we are talking about who you need to bring in early so you don’t think, shit I should have done this afterwards. So we talked about building control, engineers, and we are talking about contractors. In fact if you’re watching this and you’re looking at doing a refinance if you do not use the right damp contractor, your lender may require you to have a certificate signed off. And if your builder says, don’t worry I have just injected the walls it will all be fine. The lender may not actually have agreed to that being signed off; you need an approved damp. And the certificate is often issued to the valuer for the refinancing or even just if you’ve bought the property and it’s a shell and you’re bridging it, and then you’re going from bridging into a mortgage. They will need to see that certificate.

Anyone else at this stage we can include in this particular element of the video that we are doing? So we’ve got building, the planning, previously we’ve done the damp contractor, possibly the engineers. We obviously need to have our builder on site as well, roof, electricians, plumbers, do we need to be bringing them in at this stage, or is that part of the next stage?

“It kind of moves onto the next stage because once you’ve got your building control design and you’ve provisionally got it signed off by the council, you’ve got your details to then work with the contractor to build up your costings. And then take into account all the roof works, the electrical, the heating supplies, everything like that.”

The other things to consider are, are we in a conservation area, are there bats around. There are other more subtle things aren’t there? We have oak trees at our home and one of the things when we started our work was to check the preservation orders. And there are certain things you need to be aware of if you’re in specific locations. I remember looking at a property in Liverpool a few years ago, and the back of the property was out onto a park and there was a requirement for sash windows. And they weren’t going to give on that. Now had I not gone to that earl, I would have jumped in only to find out those 30, 35, £40,000 worth of windows which I wouldn’t have planned for.

So, there are certain things that you’ve got to be aware of aren’t there?

“Yeah absolutely, and this is why you need professionals around you to help you if you’re new to it.”

So we’ve done the first one which was planning, we are now talking about getting the right people on board.

Watch the next video to find out what the next step is in the renovation of a property, it’s Dr Ro and Colin signing out.