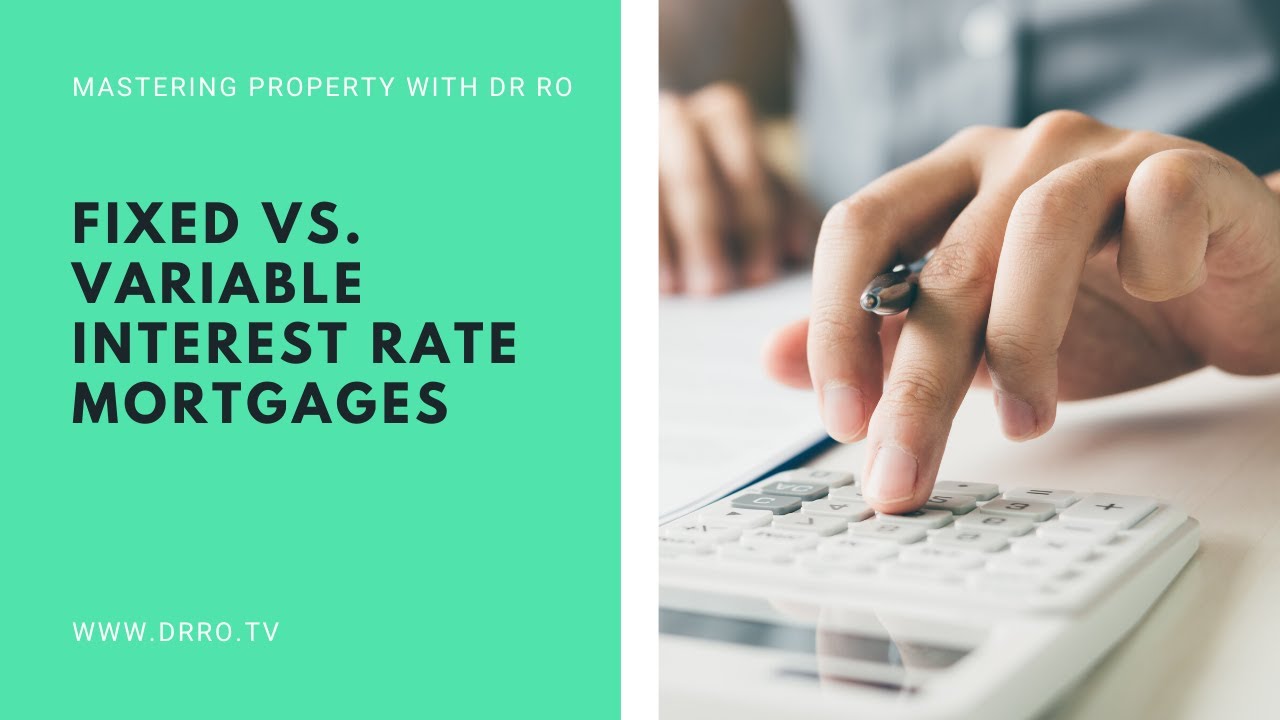 Hello folks it’s Dr Ro here, I hope you can see me. I might swing my camera around actually, I’m just in Denmark by the sea.

I’ve just been out with my children and it’s the 30th of December and I wanted to address a question that’s been coming in more recently actually, when I’ve been out speaking, but also just generally when people ask me questions about property.

By the way, this is not real fur if anybody is asking the question is this real fur. It’s one of these fake ones, it’s very warm for my bald had I have to say.

Anyway the question that has been coming in more recently is relating to interest rates and fixed rate mortgages versus variable rate mortgages, and which one should I have?

However, let me talk to you from my own perspective as an investor and a few reflections, a few thoughts on this.

So fixed rate mortgages for buy to let properties have come right down in the last four, five, six months. A couple of ways to consider this as an investor is to look ahead and think what would the banks be thinking right now as they look into the future?

If a bank was concerned about fixed rate mortgages and where the interest rates are going, then if they felt interest rates were going to go up as a general rule of thumb, again this is a general rule of thumb. If you think about it, if you’re a bank and you’re about to lend billions of pounds out into the industry and you could see in the near future interest rates are going to go up quite significantly, you’d be very nervous about fixed rate mortgages being too low.

From a banks perspective, they have to sort of take a view that if the mortgage rates need to be appealing to people as the bank I want to get interest from other people, then the key thing here if you’re a bank lending into the industry, you want to get enough interest in your mortgage product. If your interest rate is too high people aren’t going to come to you.

So, what the banks are doing at the moment if you look at it they’re setting out really low rate fixed rate mortgages two, three, four, five years out. This is my view on it, if the banks thought that interest rates were going to shoot up significantly, think about it from the banks perspective it is unlikely that you’re going to set low two and a half, three and a half percent fixed rate mortgages out for five years. If you anticipate the interest rates are going up, say in the next two years, you’ll most likely hall in your fixed rate periods and most likely hike up your interest rates or at least moderately increase them to allow for that potential adjustment that may happen.

I’ve always done this. I’ve looked at what the fixed rate mortgages are doing and to establish what I think the bank’s view is. If you look historically at some previous charts and you can go and Google this look at fixed rate mortgages in the UK, you will see that they’ve basically come down and down over time. To the point I believe probably the lowest they have been, certainly in my history as an investor over the last 20 years.

I also look at credit cards.

I noticed that bank loans at the moment are coming down, the interest rates are very low on those. So if you take it from that perspective, even now lending to limited companies the rates have come down significantly and that’s also because of the interest people have right now in setting up limited companies for buying their properties.

So you’ve got to take a view if you’re looking at this as an investor and you are taking a long-term view on your properties. People say to me, “Well should I be doing fixed rate mortgage or variable rate mortgage?”

The approach I typically use is if I’m going into the property and renovating it first, I will go in with a variable rate mortgage with no penalty on it or possibly a tiny penalty if it’s really worth it going into it, but typically I won’t go in with a penalty. The reason for that is because typically the property will be renovated after six months, then I’ll be looking at refinance and of course if I’ve got a penalty on that mortgage, then I’m going to pay a penalty in the refinancing process.

So I’ll go in with the normal variable rate mortgage on the way in, this is typically how I would do it and then I would look to do a refinance, and at that point there depending on my view, and let’s say the view is actually I don’t want to touch this property again, I’m not intending to do another refinance. I just want to lock it down and take a great income from it. It might be good quality HMO, it could be a good quality buy to let, if you’re looking at the buy to let market and you are not expecting to do anything with the property over the next four or five years. Then you could fix it down for five years.

Hopefully this is making sense.

So the choice between fixed rate mortgage and variable-rate mortgage ultimately is yours based on your strategy. Both medium, short, and long term as well as a conversation with your broker to make sure that you understand the implications of that. And of course, when you sign the paperwork you’ve got to realise that if you go for a fixed rate mortgage and then you change your mind after say, 12 months and you want do some work or sell the property or whatever. You will likely pay a penalty on that it.

It might be that you weigh up the penalty and the penalty is small enough to still make it worth doing, and that comes down to a conversation you’ve got to have with yourself, your business partner and your mortgage broker.

I looked at a 20-year fixed rate mortgage about a year and a half ago. I haven’t looked at anything that long just recently that far out just recently, but it just shows you the banks are taking the view that they don’t probably anticipate a massive shift in interest rates.

In fact, one could argue with the next recession coming ahead Bank of England might increase the rates again, it goes up to 1% it gives them a little bit of slack there, so that as we hit a recession, typically in a recession what we often see is interest rates coming back down again. So if interest rates are down at 0.25 very difficult for the banks to move them down another level because you’re down to zero. Whereas by increasing them over the last six, 12, 18 months, maybe another half a click up it gives them some slack, so that when we hit the next recession then they’ve got the opportunity to bring it back down again, and maybe that’s what the banks are anticipating.

Hopefully this helps, gives you some insight into how I think and I know a lot of other investors have a similar view to that. But again you’ve got to make your own decisions based on your strategies, how you’re exiting the properties and of course speak to your broker, take independent advice.

Enjoy the last day and a half of this beautiful 2019.