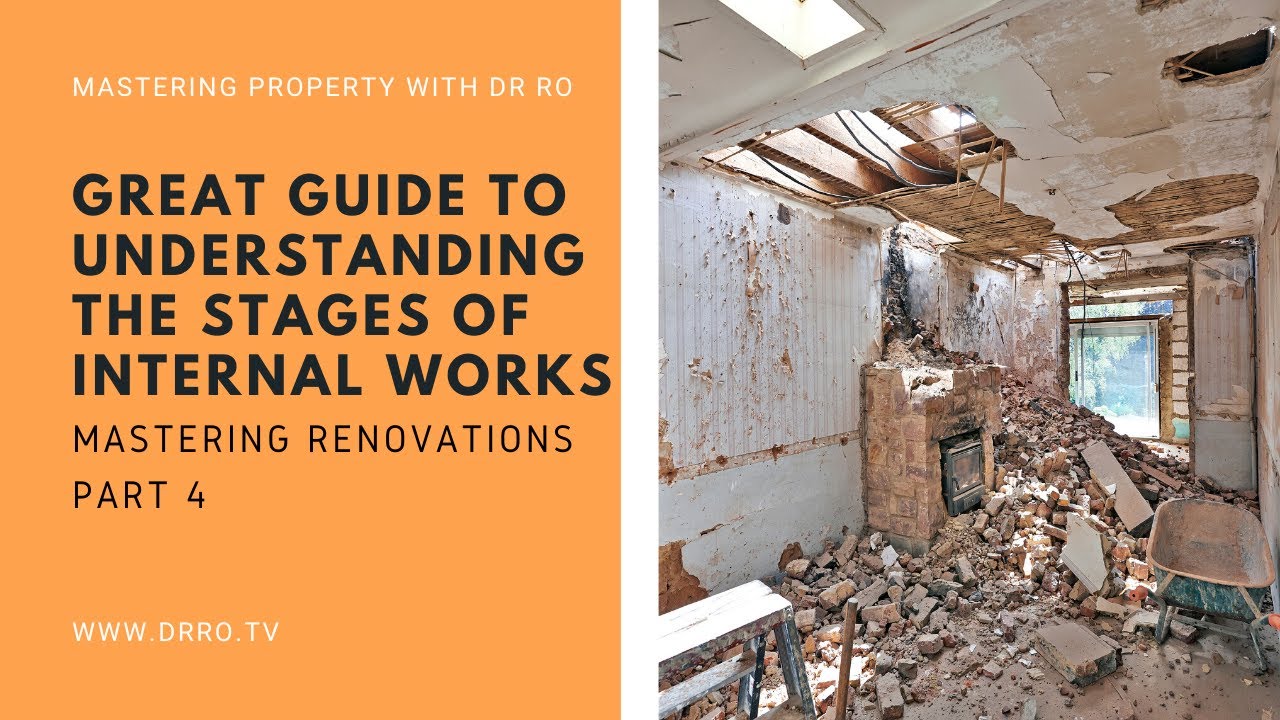 Hi it’s Dr Ro and Colin back again on the next element of renovating properties. We’ve talked about the external works which was great let and sorry about that noise in the background, but they’re working on some stuff here.

Let’s talk about internal works because that is another key element of the process isn’t it?

“That’s right, so once the external outside walls are constructed, we can then really concentrate on the internal works as well.”

“Yet, absolutely. So on a minor project you’re mainly going to be internally anyway, usually doing your redecoration, your strip out and then you’re renewing the bar from the kitchen.”

“So the strip is everything you don’t need comes straight out the property and then gets thrown away. So things like bathroom suites, bathroom tiles everything out of the bathroom. The kitchen that’s being replaced, carpets, wall finishes, covings, plasterboard everything like that needs to come out if that’s not what you’re leaving.”

A lot of people think that takes a long time. But it can be done very quickly.

“Yeah, the strip out can be very, very quick if you’ve got a good team on there.”

“Labour wise yes but you have your cart away cost.”

“So the biggest cost actually is actually waste away, the disposal. Skips aren’t cheap they’re £250, £300 plus VAT. You’ve got all of these extra costs that do go into just getting rid of the stuff.”

Yeah don’t underestimate that by the way, it depends on the site whether you can dispose on the site you are at. But most of the time you can’t do that, so the strip out has to happen. What else is going on in terms of basic renovation that they’ve got to consider? If bathroom’s and stuff are old, then they need to go out, getting it back to its  shell.

“Yeah and checking that the existing pipework and services. Is the electrics up to scratch. Is the pipework up to scratch. You might look at the fuse board and it might be dated and that needs renewing. If that needs renewing you might need new cabling. It might be old cabling. Pipework as well. That needs to be tested, with a lot of new fittings that have come into the market now and how they work is different to our old systems.”

We can almost demonstrate to some extent the stripping out process that is going on here. Do you want to talk us through?

“So this was an existing bedroom. We’ve started running cables here, but we have stripped all of this back and put in a new structure on the ceiling level to create the balcony above. So here we’ve got a couple of different elements. We’ve got the strip out, then we’ve got our structure got our external walls, and then we’ve got our roof going on at the top to create.”

Col let’s go back to the electric spot quickly. It’s important to see the different components here. You can see all the stripping, all of this. This is the sunken bath that was in here before. These were all components we had to discuss prior to actually the work starting. You’ve talked about the electric box here, so just talk us through this Col. This has a mixture of new and old.

“This here is the existing electrical board on this property and it’s quite dated. It has some old cabling in there. It has three phase coming in which will be very good for the property. We just now need to renew it so that it actually meets the standards that we need to be included here for the new systems that are going to be installed. So we’ve taken everything back and taken all of the old wiring out, and now we are renewing with a new cable and new fuse board.”

Right so this is stuff that’s happening quite early on. Right let’s go back into the other room Col. So in the process of the internal works what Collin is explaining is on a basic renovation it might just be stripping out and redecorating, but here there are some structural elements. If I pull the camera back out here so you can see what’s going on, talk to me Col, what’s going on here?

“So in this room we extended from this area here out. So we’ve created more space for the bedroom. By doing that, we’ve got the foundations in the external walls up and the opening for the window. Now above that we’ve got a new balcony to the bedroom above. So we’ve got our roof structure coming in and above the door you have the structure which acts your lintel, and then you’ve got your roof which creates the support for your roof above, which is the balcony. And then here we have a timber support coming along to support the existing structure.”

And that sits with the existing structure here. So existing here, new here.

“And then beyond that we will be insulated and creating a roof finish in the top to make it watertight.”

So all of this is taken on fairly quickly. Because you’ve talked about the foundations so, early on in the previous video you heard Colin talk about external work. That all would have been dug out and foundations would have been put in place, the concrete and then up to the damp course level. And then up out the ground. Had we not put that in place early, then there would have been a delay correct?

“Yes absolutely. Any project that you want to do is get watertight as soon as possible. Because then your inside even if we have insulation or external render going on the outside, that can be separated because once your watertight you can working inside.”

Nice. Okay, so let’s stay on the theme of internals. Is there anything else they need to be looking for internally? I’m thinking, okay, so my thoughts are things like asbestos, which was an issue on this property.

“That’s right, if you have any worries about asbestos, just please get a professional. Do not try to remove anything yourself. There are low grades, medium grades and high grades, just get a professional to come and clear it out. That’s exactly what we did here.”

Yeah, before the work started.

“Before the work started and it has to be tested as well. So if you’re on site and somebody finds asbestos that can cause delays and actually that can prevent the site from being used and actually closed.”

And on that note, they actually opened up what was a hidden fleur, I think it was. I got photographs sent to me and basically Colin had an asbestos team come in do samples and it came back negative.

“Which was great ,it didn’t hold anything up and we can move on and basically carry on.”

So there’s another one to consider internally, what other things should we be looking at internally? I guess as we are in the house as well it is layouts.

“Layout, space how things will be set out in the rooms is really important even at the early stage. Because you have your first fix of electrics going on, you need to know what furniture is going to be going in there to allow for the locations of them to go in. Floor-to-ceiling heights.”

“This room here has a slight change in level because of the balcony above.”

If you point to it Col so we can see.

“We have the existing level here, the existing timber is not very thick so, it’s a thin floor structure. Now as we bring that out to the new we have the balcony that affects our new structure, because the new structure needs to accommodate the finish above, so that has to drop down slightly. Now we still have a very generous floor-to-ceiling height here, but that could have brought the levels down so far that actually it would have felt very uncomfortable.”

Okay, so again, and if you’re looking at this from a HMO perspective square metre is essential. So can you get out a bit more square metres, can a chimney stack come out from the inside, so when you back a little point something of a square metre bearing in mind, I think at the time of recording this single room is 6.51 square metres. So if you’re 6.49 for example, it won’t pass literally they’re very strict.

“Yeah they measure everything.”

So I think anything like that takes into consideration early. You shouldn’t be having the conversation two months in going, oh God why didn’t we spot that before.

“Yeah that can cause a big issue for the HMO officer. Because your HMO might go from five rooms down to four rooms which then affects the value and the income.”

We had that a year or two ago, you were with me when we found it actually. The valuer mis-measured the rooms and then we had a bit of an issue with the revaluation. We knew we did it to the right size, but the valuer mis-measured it. So these are tiny things to consider early on, how can I seek some more space out, the layout, the liveability of the property after it’s finished.

Do it now whilst you are in the property, anything else at this stage that needs to be considered before we go to this next stage?

“With this particular project we are putting underfloor heating in so, you had your floor levels come up, so all of the seals and the openings are allowed for that. That doesn’t affect basic buy to lets necessarily, unless you are going to install something like underfloor heating, but sometimes the cost of that doesn’t warrant what you’re going to  be expected to get as a return.”

I think you’re right. I mean heating generally; radiators think about the placement of the radiators. I’ve seen people try to add extra windows in and then afterwards said, where am I going to stick the radiators in this room? So I think tiny things like that add up and in the process of renovation remember, yes, you want to get it finished quickly, but actually that planning speeds things up. That extra time spent on beginning planning will speed it up through the whole process as well.

Alright see you on the next video.