Looking After Your HMOs Over the Winter Months 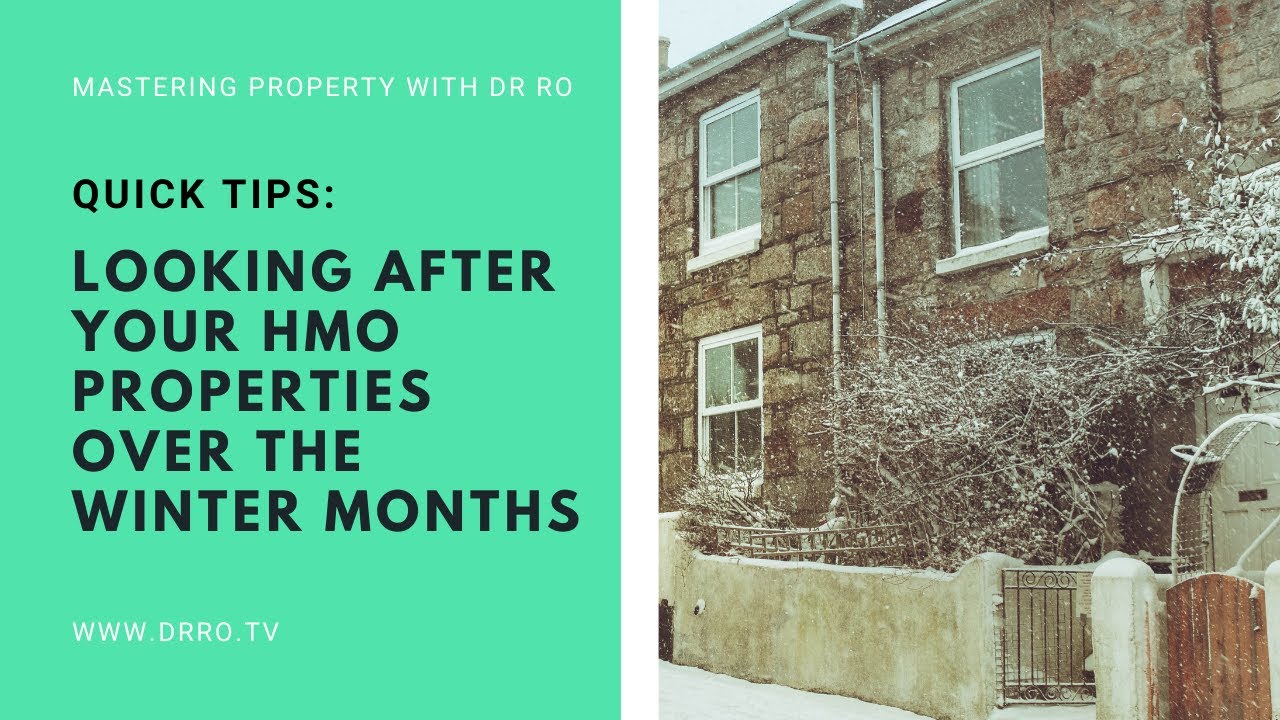 Hey it’s Dr Ro here, greetings to everybody all of you budding property investors or those of you that have already got properties or moving into the HMO market.

I’m just actually here in Denmark charging up my car for those interested this is what it looks like on the Tesla when you’re charging it up. I’ve been here for about 35, 40 minutes, I’ve put on 289 km on the charge. It’s got 35 minutes until it’s full, I don’t need it full, I’ll be peeling off a bit.

But I just thought I’d tackle this very brief subject; it’s going to be five minutes.

It’s more an experience a learning lesson over the years, those of you that are brand-new to property maybe moving into the buy to let market. This is less important although you can be aware of it.

Typically over the Christmas period whether you own a buy to let property or an HMO property, more so with HMOs less with a buy to let. Buy to lets typically people are living in the home as a home.

So ordinarily what will happen is they will stay in the house, the family will come to visit the property they’ll have friends and everybody else come and visit, it will typically be there. And for probably two and a half, three years when I started my portfolio back in 2001 everything we had was buy to let properties.

My first one was in Oxford we were saving up our money for the next one in the same area. It wasn’t until we actually went through the training and then we went on to do the mentoring we realised you can own properties all over the country in cheaper areas.

But in that first period everything we bought were typically buy to lets, I actually had some asylum seeker properties in those first four, five years, which were quite hands off and we had some social housing strategies that we put in place quite early.

Those of you that are still new to this don’t worry, these types of strategies will start to come into play and you’ll learn more about these.

So with the buy to let properties we tended not to really have to think too much about the tenants over the Christmas period, apart from maybe giving them Christmas cards, wishing them well, sending a card through our letting agent. Those sorts of things because they’re staying in the properties.

It wasn’t until two and half, three years in that we started to buy houses in multiple occupation. For those of you watching this right now, this is a great strategy and it’s a lot quicker to get into than it was for us and also the demand is so much higher than it was back then.

Remember we are talking nearly 20 years ago now, so the demand for HMOs has gone up massively and the result of that is that there are obviously more HMO properties, but more landlords coming into the market to do HMOs. And what I noticed in my first year or two as a HMO landlord was that these are single people, possibly couples, maybe  people that have gone through a divorce, possibly people that are settling in the country, not in a position to buy properties for themselves. Usually on their own and usually living away in a town away from somewhere else.

So at Christmas time they go back to their families. You don’t normally get somebody living in a single room in a HMO or a double room in a HMO having the whole family suddenly arrive and sleep with them at the house. It can happen. They’ll come and visit, but they typically won’t come and stay there.

So what I found with my HMOs was that the tenants were leaving the house to go to visit their family, same thing with student lets by the way as well. If you’ve got properties already be mindful of this because what I started to notice was little things like windows that had been left open, it is not a major thing, but it’s kind of annoying through the winter months.

What I’m trying to say is be mindful.

The easiest way to do this, there are two ways. You can either send your tenants a Christmas card and say this is the landlord here wishing you an amazing Christmas have a great time, you might even want to treat them to something, entirely up to you. But can I ask you just kindly to remember when you leave the house to keep the windows closed and to make sure the central heating is set down to a low, not necessarily off because again, this only happened once to me years and years ago.

I lived in Herefordshire back in those days when we had one of the coldest winters recorded, I remember where I lived in the valley we were living in it was -15. And one of our properties, one of the HMOs I think it was a student let. The students had gone off and turned the heating off. Of course the downside to that is if you have a nominal heating in your HMO the pipes can freeze, not always but in this example we had a situation like that.

So I’m just warning you on some of the things that can happen.

Whereas if you’ve got a buy to let and a family living there, typically that doesn’t happen. So one example is send them a Christmas card, general card to the whole group or you can do it individually, but it’s just a nice reminder to say please if you could when you’re away, drop the temperature really low. Make sure the windows are closed and running water is switched off.

Because again these are little things that people forget. They rush out the house and they’ve left the tap running, tiny things like that. And remember unlike a family let where they might be staying with family over Christmas, the HMO might be empty for a while and I would recommend you have some sort of safety light, security light or something that is on whilst they’re away.

Now whether you want to pay to have one of those put in and it’s basically one of these timed lights that go on and off or you have one particular light, they should all be low energy lights anyway. But you may ask them to leave the landing light on or something like that as well.

So couple things just to remind you, write to them, ask them if they could just make sure the heating is left on nominal not blasting by the way, or if you’ve got a hive system in there even better. You can control it from your end remotely through the Wi-Fi system.

Two, can they make sure they’ve checked that taps are switched off, lockdown things like that. Doors are locked. Windows are closed. Simple things like this, it is ultimately their responsibility but when something happens or if it gets cold they turn the heating up. It is easier if you just remind them, have a checklist for them.

Alternatively asked the letting agent if they would be prepared to do that on your behalf. Whether they can go around and just remind the tenants or drop a letter to the tenants. A lot of letting agents probably wouldn’t do this naturally, so you might need to remind them or you could potentially send cards in a big envelope, one for each tenant or just one big card and ask the letting agent to drop it off.

Possibly even with a bottle of wine or something like that, a small gesture just as a way of standing out in front of your tenants. That was it really, that is the main tip for the winter months.

For a brand-new landlord running a 5,6,7,8,9-bedroom property it can be a little bit daunting when you first start out, but what I would say is, it’s a bit like a mini hotel, treat the tenants with respect, give them some reminders. Find out when they typically are going to be out, that’s something to be aware of. Maybe the letting agent can just check in as you go into the New Year.

But the key thing here is heating, I wouldn’t want it off completely because you want to keep it for the minimum temperature for freezing, windows and doors, security and heating as I’ve mentioned already.

I’ll speak to you all soon.