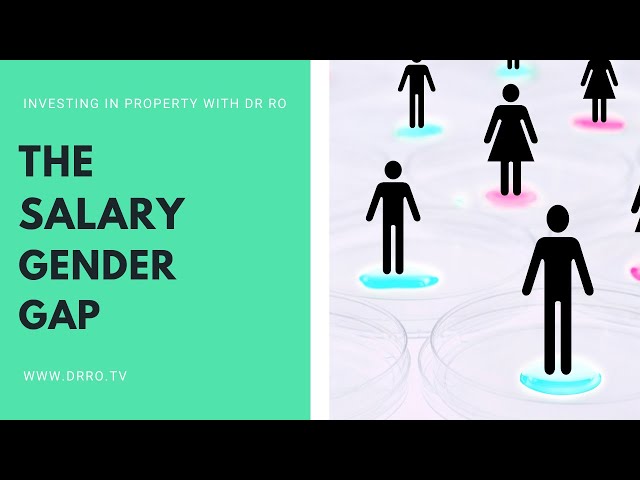 Hey folks, it’s Dr Ro. I’ve been in front of an audience talking about investing in property in the kingdom, and one of the messages that I shared in this last hour or so was about the gender pay gap, the pension gender pay gap, the investment of wealth, gender gap, which is a real phenomenon.

If you’re a woman and you don’t know that in the last year women are twice as likely to not have been kept in their jobs in the last year, but the ones that have their salaries have dropped on average by about £460 a month.

Then you start to look at the gap, the pension gap between what a woman retires compared to what a man retires on because of that fact they’ve had to take time out to come back into the workplace, et cetera due to the kids the gap is widening.

Then we talk about the wealth gap agenda. It gets ridiculous.

I’ve been passionately behind this probably as I’ve seen my mum work so hard after my father died and she worked so hard so I grew up with this bee in my bonnet about it is coming more to the front at the moment and I’m noticing a lot of conflict happening between couples where actually women driven are more passionate about building a property business.

We’re seeing this conflict with people and I am talking to women who want to earn more money and I had a lady recently where her husband literally didn’t even want her to be on the training. Kept coming and looking over her shoulder angry because he didn’t want to look after the kids for the weekend. It is just outrageous. This is based on the fact that people are brought up, myself included.

Men and women are brought up to get an education study really hard and then get into a job and all of a sudden we’re into this filtered system which is without doubt weighted towards the male in the industry and in the workplace, et cetera it’s been like that as long as 50 years and probingly worse when I grew up. The point I want to make is there are opportunities out there that are irrelevant on your agenda, and this is the point is you want a vehicle that says fuck sex, your age and background you can make money if you do this and that’s what I thought I’d share with you. These are four things you might want to consider.

Number one you want an asset-based income.

This is where you invest in an asset i.e. property as the vehicle here and now you’ve got a bricks and mortar income that you own that produces a passive income. It doesn’t give a shit what gender you are, how old you are, whether you’re married, divorced. All it knows is you bought it and it produces an income. You rent the property out, you receive a certain income, you pay off your mortgage or expenses, you’ve got a net cash that could be 100, 200,2,000 a month. Every property strategy is slightly different and that’s the benefit of this. It’s a bricks and mortar building, whether it’s a small one-bedroom flat or a large property doesn’t matter, and it produces a cash flow into your bank account which is owned by you for the ladies in your name and no one can take it away from you and you can’t be told you can’t earn this much because men in this industry earn this much. In the acting profession it’s the same thing, it’s ridiculous.

An asset based income if you, for example, did dropship business on Amazon that’s not really asset based, it can make money, but it’s not a bricks and mortar type income. If you own stock and you owned them, and it produces a dividend for you each single year then you get an income from it and you’re owning something albeit it can go up and down, of course, but at least it’s something you own.

You could hold gold, a commodity that is not going to produce an income for you but gold over time will go up in value, so that’s a long term wealth building strategy, a little different. My point is it’s an asset but if you want an asset based income it means buying something whether you buy a building which is a business and it produces an income or you simply buy a building or property and you turn it into an income. The second point is it is irrelevant what your background is, so you want to target things that don’t discriminate in that respect.

You might say, for a woman it’s tough to get into the property market. For example, that is not true. I’ve got three four ladies on this weekend who are supporting me, ages ranging from 24 years through to someone in their 40s and each of them has built it on their own. At the end of the day if you are professional you do this properly and you know how to carry yourself, communicate effectively, and you are passionate, and you’ve got the skill set you can buy and do a large property business. Irrespective women make better investors as they’re more intuitive and don’t rush in with an ego.

The third thing is, it needs to have a year-on-year increase in income that’s really important. If you go to a salaried job as we discovered there might be people growing up the corporate ladder up to 2019, 2020 this is a woman in a career and all of sudden last year hits and statistics twice as more likely to lost their job, lose their job or gets downgraded and suddenly now in a salary that is lower and now you’ve got to start back up again. Whereas with real estate if you buy property that produces £1,000 per month cash flow for you that’s 12,000 per month just a year, you just added to your salary for that year.

Now, in the following year if you do the same thing again buy one property that produces £1,000 per month. You just added £24,000 a year to your overall house on incomes. In the third year you do that again and you buy another property that produces £1000 a month cash you’ve added £36,000 that is just one but what if you did two, or three you can see this increased incremental increase in income which is totally relevant to your agenda.

The last thing is you have control, you have control back if your partner doesn’t want to do this, do it anyway because, statistically, women outlive men by 10 to 15 years. I will say if a man is holding a woman back he’s actually acting very selfishly because at some point he won’t be around statistically and she may be left with financially a more challenging situation.

Statistically, I’ve heard figures like six to seven out of 10 women are financially in difficult situations because they’ve had to leave the workplace to look after the family comeback. The pension wasn’t in place, he didn’t put protection in place, take back control.

This is your opportunity to do it and if your partner loves you, and they don’t want to do it, then say I love you but I’m doing it for me, but also doing it for us. If they are threatened by what you are doing that’s a bigger issue, it’s a deeper issue in the relationship.

It has to do with their own blocks, their own issues and they need to get over it as at the end of the day this is about financial security for your family and if you’ve got a partner that doesn’t want to do it all I can say that’s a conversation for another day. But you have to have that conversation with them and explain I want to do this.

For the women watching this it is a great vehicle. It’s your choice. You either listen to the ones that put you down or you become empowered by your own voice and say I’m going to do this and take back control.

That’s my message, hopefully you liked it.