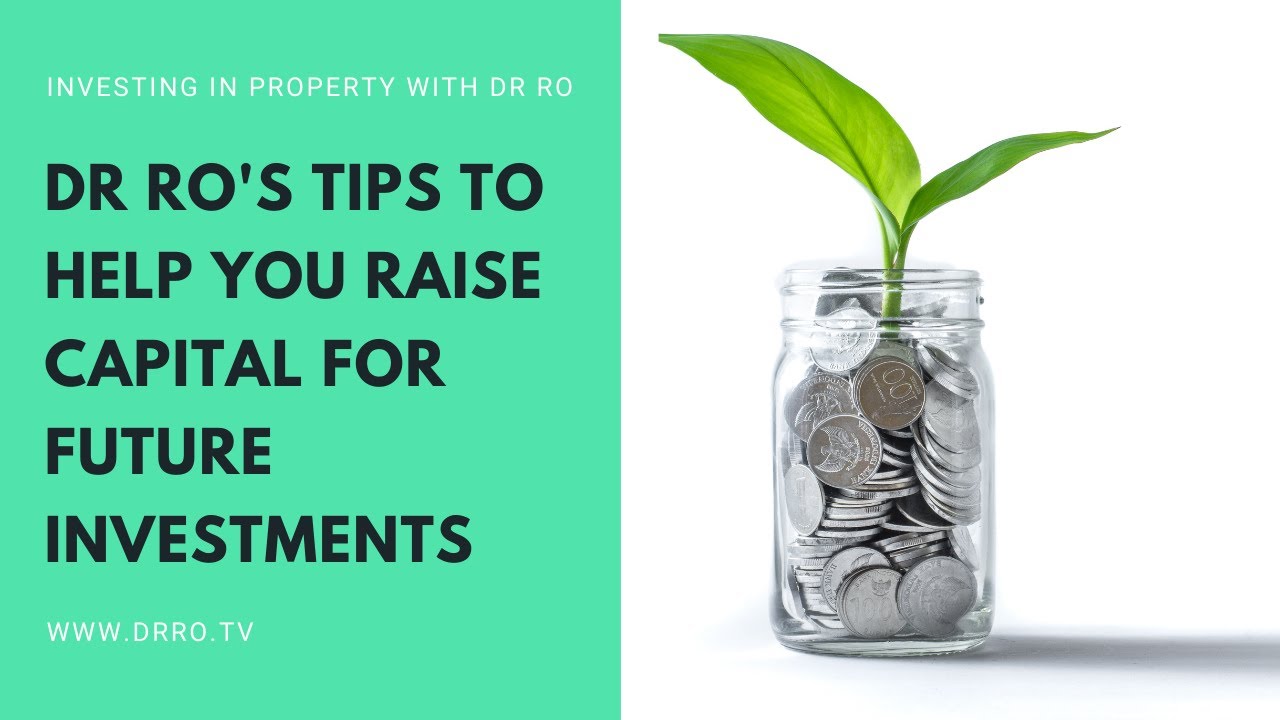 Hey, folks Dr Ro here hope you are all well.

I wanted to send you a message as we head into 2021 as I’m recording this about angel funding and those of you watching who are in the field of professional property investing as you know, it’s one of my passions and one of the areas that I teach.

Not just property investment but raising money for your property business. I can’t give you financial advice, it’s not intended to be financial advice. I want to talk about some things that I found over the years help in the process.

If you’re looking to raise money for your property investing there are four things you need to be aware.

First of all don’t ever be desperate make sure you’re focused on primarily looking to help people. Many people the challenge, of course, is that they’re nervous about approaching somebody and actually this is a fantastic time. The banks are performing really badly.

Most people are frustrated with where things are going. It’s not looking like it’s getting better at the moment, not in the foreseeable future we’re seeing fixed rate mortgages being locked very low out for five years or more in some cases. They’ve indicated that the banks aren’t expecting massive changes in interest rate change and of course that means for savers it’s not working for them. Number one don’t go chasing around people.

Sometimes it’s so easy when we’re passionate and enthusiastic to go to everybody. What I found is if you go into a broad conversation just generally about how things are going at the moment, talk about the market. Talk about government announcements bring and steer the conversation towards interest rates and how bad it must be for savers and those people in their career all their lives and work too hard, put money in savings. They say at some point in the future we can hopefully use it towards a nest egg.

Allow the conversation to be broad enough so that as you start it you then back out the conversation a bit to allow them to fill the space in that conversation and then direct it. Number two is see what response they give you and from their response look for the potential hooks that you can steer them on. From a Communicating with Impact perspective, this is a combination of you and them, there are three components in the system there is you, them and the environment.

Keep the environment out for a minute, I want to talk to them and I’m dropping specific messages in there. Component number two is essentially looking for the first three components involving preparation, outcome, message. In those first three components I want to make sure I know what my outcome is and I’m dropping messages into the conversation in such a way it hooks them and they lean forward.

Part of my message is getting their interest, identifying the pain, letting them know things aren’t good at the moment if you’ve just got money sat in the banks. Then I listen, I listen and as soon as they say certain things I move towards you which is getting a connection, creating an impact and influencing people. If you make your offer early you haven’t got influence, impact, attention, you’re not going to win them over.

I want them to share that with me and I’m looking for something in their language that suggests there is a problem. They don’t know what to do with the money, it’s been sat there for three years in a bond. The bond ends this year. It’s been making 1% a year. We want to go on holiday, but we can’t because of Covid and we don’t have the money because the interest rates are so low. Okay, I’ve got a solution for that. I’m looking and listening and the whole point is I don’t get greedy.

The first three there are very relaxed. You could press the pause after three and sometimes if I’m rushed for time or if I don’t feel this is the appropriate place to have the conversation at a social gathering, phone call, you’re busy there is a lot of noise going on around you, which is the environmental factor of Communicating with Impact by way.

The first three there are gathering, and I might say I have something that interests you, I’m too busy right now there is a lot of noise and distraction at the moment. How about we set up a time to talk to you about an opportunity that might actually be able to pay for the holiday you mentioned. It will get your money working harder than it is in the bank, et cetera et cetera and I leave a massive hook there for them. Then when I start to set this up I don’t want to be greedy, I want people to want to come back to me and give me the money again for 12, 18, 24 months.

I want to get a sense of what they want and what I’m prepared to give up. If I make 18% return on a project over there and I’ve got three people in front of me one wants 10, seven and four ideally, I work with the person with four. If I’m going to make 38, 40, 58% return on investment I might be happier to give up a higher return over here to somebody else, but I just don’t want to get greedy. I want to make sure everybody wins in the process moving forward.

So find out what it is they want.

Find out what kind of return they’d like to get and what they’d like to receive and then work on the basis that you’re more likely to build a longer relationship if you give them a little bit more than they’re expecting, than if you just barely given what they’re looking for. And that comes down to personal choice that you have.

I think if you look into the next year, which is 2021, there’s going to be a lot of people frustrated out there, and if you can show them how to beat the bank. If you can show them how their money can be put into opportunities where it’s an asset rather than the stock market where they’re nervous, but you as a property investor are happy to invest. Fantastic. It might be they are a trader, and they trade the market, which is a fantastic strategy, but they have some spare liquid and they don’t want to put more into it. They want to diversify.

So you can talk to them about diversification, but it has to be a win, win. If you come from that perspective, you are less desperate, your energy, attitude and mindset changes, as they start to see that you’re someone who is genuine and honest.

You will find that you get into the synchronistic harmony with them and often people open up and say I’ve actually got more in the bank. Think about that as we move into the next year.

There’s going to be a lot of people that want their money to work harder, but you can’t go out like a pit bull terrier and go straight for the jugular. You’ve got to do it in stages.

Hopefully, that was useful.

Disclaimer: This website (the “Blog”) is created and authored by Dr Rohan Weerasinghe (the “Content Creator”) and is published and provided for informational and entertainment purposes only. Content can come in the form of video, audio and written word, all considered (the Website or Blog). The information in the Blog constitutes the Content Creator’s own opinions (and any guest bloggers posting from time to time) and it should not be regarded as financial or investment advice. Any person(s) reading or watching the content on this website should make their own commercial assessment of a financial or investment opportunity after seeking the advice of an appropriately authorised or regulated financial advisor. The views reflected in the commentary are subject to change at any time without notice.